One thing many of the people working in STEM careers (Science, Technology, Engineering and Mathematics) on the R/V Revelle have in common is that they did not start out planning to work at the jobs they have today. For many, at some point they caught the ocean research bug. Somehow, the ocean just got into their blood and they had to keep coming back. Working on a sea-going research vessel for sometimes weeks or months at a time is not for everyone, but for those who choose this career they would have it no other way. 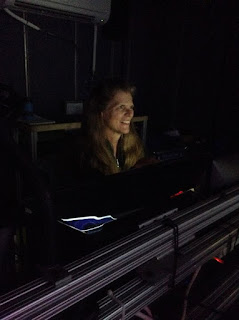 Andra earned her undergraduate degree in biology at University of California (UC) at San Diego. While there, she applied for a position to work at the Scripps Institution of Oceanography. At that time, ship navigation and seafloor studies were just beginning to develop toward the level they are today. At Scripps, Andra went on research expeditions and specialized in collecting and organizing the data, multibeam and making sense of the pre-GPS navigation. Andra honed her technical and computer skills on the job. While on Easter Island at the end of a research expedition, Andra accepted her present position at Oregon State University and NOAA. Her career has let her travel to various ports around the Pacific Ocean and to see amazing things on the seafloor. Her work is an integral part of this research expedition because it is so important to ensure that every sample, photo, instrument deployment and recovery be recorded both for time and location. Andra has been at sea at Axial Volcano many times and is a font of information about the various sites around the volcano that have been a part of this long-term study. At the end of this expedition, Andra will compile the Cruise Report and send it to the scientists, ROV and AUV engineers, and to the ship, and it will be available on line. 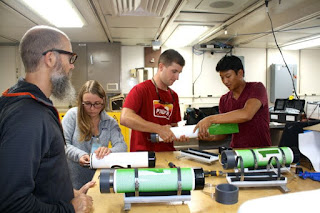 Scott is one of the principal investigators (PI’s) for this expedition. As an undergraduate, Scott completed a double major in physics and art at Hendrix College. He then went to Texas A&M to complete graduate work in physics, but while there he found that the pure physics research he was doing did not interest him as much as he had thought. He decided to take some geophysics courses and decided to switch his focus. After he finished his MS in Physics he moved to UC San Diego at Scripps to work on a PhD in geophysics. Scott started working at Axial Volcano with Bill Chadwick as part of his PhD thesis. Together they worked on collecting and analyzing the pressure data from Axial. Scott also worked on a project in the North Sea on injection of excess CO2 from gas wells into a saline aquifer. For that project he was also moving an instrument from benchmark to benchmark, but measuring gravity and pressure. Since that time he has added projects in Bangladesh and the East African Rift Zone. Presently, Scott does research, oversees graduate students and teaches classes at UNC Wilmington. 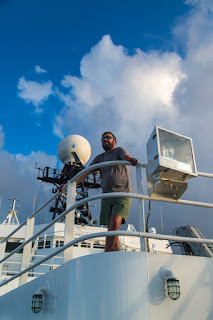 Brent went to UC Irvine and majored in political science and minored in computer science. His first job out of college was as a computer technician for the human resources department at UC Santa Barbara. Brent started looking for a job that would offer more adventure, travel and one where he would feel like he was making a difference in the world. So when he saw an advertised job at Scripps he applied. He was hired and now works as computer technician for Scripps at UC San Diego. He goes to sea about three to four months a year. When he is on shore, he works on the development of new computer systems for ships, monitors the ship systems remotely and generally solves computer tech problems. While at sea he works with sonars and computer network, the tech infrastructure, and works with scientists to make sure the ship is offering what they need. The biggest challenge for him is being away from family and friends, but now with advanced internet communication he can keep in touch even while he is at sea. The biggest technical challenge is when the ship’s network goes down. He really likes the marine biology expeditions to study the off shore California coastal currents. He has been to Africa and gone past Patagonia during his various trips at sea, so travel is one of the best things about this job as well as feeling like he is contributing to the science that gets done on each expedition. 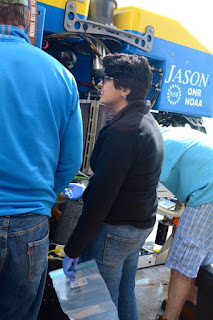 Srishti Kashyap
Studying: PhD in Geomicrobiology at University of Massachusetts at Amherst.

Srishti is onboard to collect microbiology, rock, and mineral samples for collaborators and to use in her own experiments designed to better understand the chemical and biological behaviors of microbes that do not breathe oxygen to live (these are readily found at volcanically active spots on the seafloor). Srishti started with a double major in astronomy and biology as an undergrad at Mt. Holyoke College. After college, she worked for a year at NASA Goddard Space Flight Center. While there she worked with the Curiosity rover group (Curiosity is a robot sampler on Mars). She was part of the Sample Analysis at Mars (SAM) team, which focused on evaluating if Mars currently has or ever had organic molecules. While Curiosity was making measurements, Srishti was running wet chemical analyses analogous to those done on the rover to decipher the data received from Mars. Srishti’s search for life on other planets has led her to her current PhD research at University of Massachusetts. She is studying geomicrobiology. Her work seeks to understand how deep sea microbes transform minerals by breathing different types of iron oxides minerals. She wants to understand how microbes help form and transform these minerals at hydrothermal vents (the kinetics of these reactions, the mineralogy of these transformations and physiology of these organisms).

From an early age Chris has enjoyed video games and electronics. He went to a vocational high school and studied electronics. He got a job after high school working for Falmouth Electronics. He started soldering circuit boards and moved up to testing the boards. In the economic downturn he was laid off and found a job at WHOI. He started there making magnetotelluric instruments and got interested in ROV’s. He started with the Nereid Under Ice (NUI) ROV and is now working with the Jason ROV team. 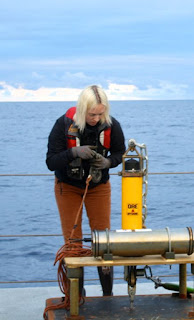 Lauren graduated from UC Santa Barbara (UCSB) with a BS in Environmental Studies with an aquatic biology focus. When she graduated she started to look for marine science positions. She was especially interested in scientific diving and an internship at UCSB on gray whale research led to her getting hired at UCSD Scripps to work on whale and dolphin acoustics. She worked on data analysis and she got to go to sea a lot. While on ships she would measure real-time acoustics and make observations of whales. That got her hooked on going to sea. After 4 or 5 years she was laid off when research funding got tighter. For a while she had a temporary job for the Oregon Department of Fish and Wildlife doing animal surveys. She began to look for other jobs in Oregon and saw that HMSC had a position. Her sea-going experience helped her land the job with the NOAA acoustics group. In the ten months she has been working at the HMSC she has been to sea three different times (once to Antarctica) for a total of two months on ships. Her job is to deploy and recover instruments as well as arrange the logistics and prepare instruments. She does shipping, purchasing parts and building instruments (like OBH’s -ocean bottom hydrophones) in the lab at HMSC. She is challenged by some of the electrical work involved and overall she loves the work she does. 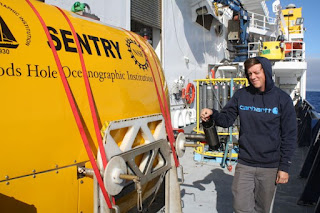 Danik started his marine career working as a Commercial Diver. He graduated from Divers Institute of Technology, a dive academy located in Seattle, Washington. In general, commercial dive academies have a high drop-out rate due to the mental and physical stresses experienced during in water training. After completion of his training he went to work for CalDive, a California based commercial dive outfit that worked primary in the Gulf of Mexico. Danik was involved in deep-water salvage and pipe line restoration, acting mainly as a dive medic and underwater welder. After the Gulf of Mexico spill he decided to leave for moral reasons and look for work in science. A colleague of his had a contact at Woods Hole Oceanographic Institution who was hiring for divers and field techs. He applied and once hired worked as a scientific dive master for 5 years, doing scientific research around the world and training new divers and students. During that time Danik took courses in Ocean Engineering and learned CAD as well as machining techniques. He heard the Alvin program was looking for pilot candidates and after applying began training as a pilot/mechanic. Danik currently works for the Alvin group, taking scientists to the seafloor at depths of 3000 meters and helping them perform deep ocean research. When Alvin is not at sea Danik will work with other vehicle groups as a mechanic/pilot such as AUV Sentry or the Exosuit program.

Camilla grew up in England and attended the University of Greenish in London where she earned her BS in science and her Masters degree. Her Masters research was on chromite texture in the Trooclos Ophiolite. She then started work on her PhD at Open University. She worked on Argon-Argon Geochronology. She then got a post-doctoral position in Norway helping to run the Argon lab for their geologic survey. Argon isotopes are routinely used to date rocks in the range of 20,000 to over 1 billion years old. She was a member of the Nobel Gas Network and from that she heard about the job in Newport, Oregon at the Hatfield Marine Science Center working for the NOAA Earth Ocean Interactions program on Helium isotope studies.

Interested in a job similar to these? Or other jobs on ocean research vessels? Here are the web address for some of the major oceanographic institutions. Most are hiring right now!