During this cruise we are choreographing a complicated dance with the two underwater vehicles, Sentry and Jason. We have Sentry off making multibeam surveys as described in the “Text Messages and Transducers” blog post and Jason is running a multi-day pressure survey dive (more about that later). Sentry went into the water at about 8 pm last night and Jason began its dive at 4 am. We are all tired this fifth day of the cruise, especially the chemists who were up all night dealing with samples collected during yesterday’s Jason dive to the International District vent field to sample high and low temperature vents. The video footage of the sea floor venting sites was amazing and we will add some Jason video from the dive in a few days.

The video below show the control van displays while sampling the  top of "El Guapo" vent  with the fluid sampler.  Scientists are controlling the camera on the center panel and viewing the biology down the chimney while the pilot is sampling the flaming fluid:


But for now I want to describe a few amazing things about Jason. There is something magical about the ROV Jason and its control van. Jason is tethered to the ship by a fiber-optic cable, which provides power data communication to Jason. As the ship moves on the ocean surface, Jason moves along with it just above the seafloor nearly a mile below. In the control van, the Jason team monitors and controls Jason and we can all see live video of the seafloor. In the last year or two there have been some major changes to the Jason vehicle, deployment systems, and the control van.


In fact, the Jason control van is new on this trip and is getting its first ‘at sea’ experience and has been working very well. There were a few issues to be resolved in the first few days of the cruise and the Jason team worked long hours to get everything ready for our first dive. This new control van is more spacious and comfortable than the old one. More people can be in the van during dives and the screens are much bigger for looking at the high-resolution video and all of the other data coming from Jason during dives.

It is amazing to see all the screens in the control van, and I am going to describe some of them and what they do. There are at least 10 cameras on Jason. There are 3 main forward facing cameras that can be directed to look in different directions. There is one camera looking up at the cable and one facing downward at the seafloor. There is also a camera looking backward, like a rear-view mirror, and one looking at each manipulator arm. Another camera focuses on the dials of hydraulic pressure on the vehicle. Most of the images from these cameras are displayed in the control van. In addition, there are screens showing navigation information about the ship, Sentry AUV and Jason. All of these views can be moved to different screen locations or can be shown in different sizes depending on what is needed for the operation at hand. 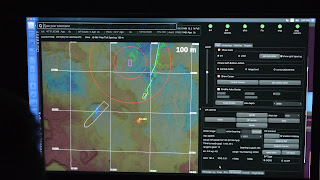 In the photo left, the screen shows the locations of the ship, Jason, the transponder about 140 meters up the cable from Jason, and if Sentry is nearby it will show Sentry’s location too. The Jason team manages the position of Jason relative to the ship in such a way that no kinks or twists occur in the cable and to make sure this does not happen the pilot and navigator are always monitoring the way the cable is oriented between Jason and the ship.

There are 34 syntactic foam footballs above Jason on the cable to help keep the cable off the seafloor and in the correct ‘S’ shape to allow Jason to be buffered from the motion of the ship at the surface. Each football float costs $600, because they are made of syntactic foam (a high-tech material that stays buoyant at high pressure), so just the footballs alone cost about twenty thousand dollars. That is how important the cable is to the Jason group. The football floats have to be attached to the cable during each Jason deployment and removed during each recovery.

There are two or three screens in the control van showing various aspects of the winch and cable to the Jason team. When Jason is actively being piloted there is a navigator, pilot and engineer all keeping track of various parts of the operation. The navigator usually has control of the ship and coordinates Jason’s movements with the bridge and the Jason pilot. The pilot “drives” Jason by controlling Jason’s thusters and also controls the manipulator arms when Jason is deploying instruments or collecting samples using various joystick controls.

I find every aspect of the Jason operation fascinating. Crowds gather on the back of the ship (photo below) to watch Jason be deployed or recovered. The control van usually has a few visitors watching the action.

The most amazing part is watching the magical aspects of Jason’s activities from the control van. I could stay in there all day. The high-definition video feeds from the sea floor are beyond belief. I have to remind myself that this is all going on directly under my feet a mile below the ship. It’s not some TV show from somewhere else – this is happening right here and right now. How cool is that? It’s opening up a key part of our planet to viewing and exploration that few humans have ever seen. I know that the scientists, busy as they are completing their research, will also occasionally stop now and then and just stare at the wild and wonderful environment we are visiting during this research cruise.

Watch this video of the control room while sampling the anhydrite (high temperature vent) "Diva"...it's magic!: